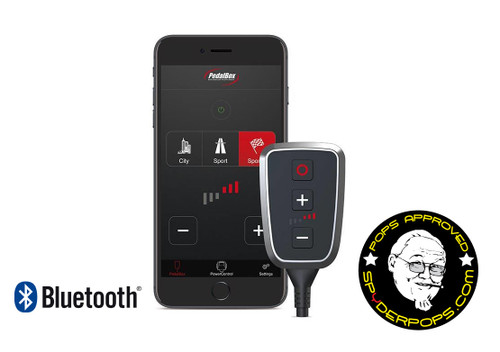 The Throttle Response Controller with your smartphone and app control

In addition to the keypad the PedalBox+ can be controlled by app on your smartphone. Using the app will keep it stealth and out of the elements keeping down the clutter on your handlebars.

These are the app's advantages:

"We have been selling and installing these in our shop since they came on the market and have been using them for the same amount of time. We won’t sell something until we have tested it for the long haul. The difference between stock and with the Pedalbox+ will blow you away.

The PerfecTune feature is what set’s this product apart from the others as it has throttle synchronization that keeps it from throwing codes. In the Sport+ mode you get full throttle action which is the real deal. It’s all about throttle control that you can’t get by just twisting faster. You will have to be ready for it, hang-on!

We have compared the PedalBox+ to the Full ECM tune side by side in actual acceleration situations. The throttle response from the PedalBox+ is a real contender until the ECM tuned machine reaches higher RPM’s there is no noticeable difference. The advantage of the PedalBox+ is the fact that it does not leave any tracks on the ECM like the tuned machine and can be turned off at any time and unplugged without a trace." POP's